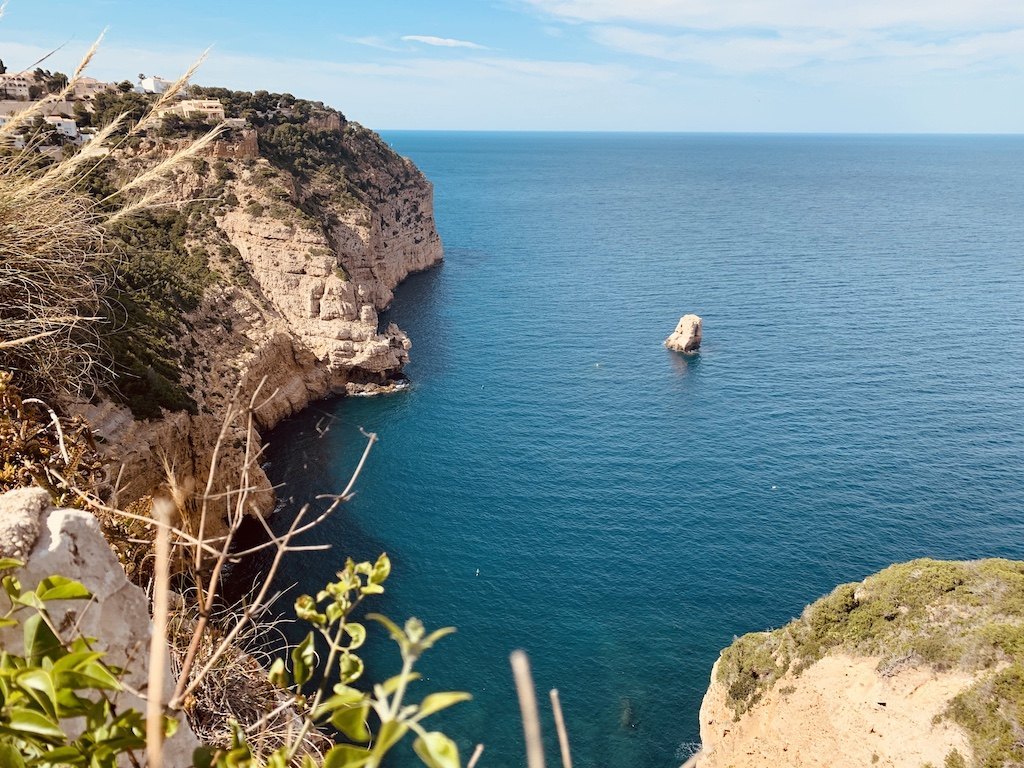 Located in the northwest of the province of Alicante, what distinguishes Jávea and makes it unique is its distinctive landscape and rugged terrain, varied and shaped by the wind and the Mediterranean Sea; we find valleys, mountains, bays, islands, cliffs etc…

It is situated between Cape San Antonio and Cape Prim, forming between them the bay of Jávea, although the most important place, visually, is Cape Nao, which extends into the Mediterranean Sea as Spain’s most easterly point.

We can find a wide variety of beaches ranging from typical sandy beaches, such as the Arenal beach, to pebbles, as in the Port, then Tosca along the Montañar and a succession of coves between cliffs ideal for diving and enjoy the seascape. The most notable ones are, La Caleta, the Barraca Cove just a few kilometers from Portichol Island, Granadella and the Ambolo nudist beach, which has an island in front of it called the Discoverer, which was named after a member of Christopher Columbus’s crew on his epic voyage culminating in the discovery of America.

Mount Montgo, with its summit of 750 meters, is one of Javea’s most prominent and identifiable features and in 1987 it was declared a nature reserve for its flora and fauna.

During the nineteenth century, the population moved 2 km inland from the coast to protect itself from pirate attacks, walling themselves in around the church of San Bartholomew which we now know as the Old Town.

During the War of Spanish Succession (1702-1713) Jávea supported the Bourbon side and, as a result, obtained privileges which boosted the local economy. The Port began to gain momentum thanks to an export concession and in agriculture wheat gained ground alongside other crops such as vines, carobs, olives and almonds. Mills used in those days to grind flour are still preserved today, such as the windmills on La Plana and the Barrequeres water mills.

Later it was the vineyards that took over, and strong foreign demand drove the production of raisins. In the second half of the nineteenth century this increase in demand enriched the economy which resulted in a mercantile bourgeoisie.

The orange is another important crop which still remains, and was domesticated due to Javea’s abundant reserve of underground water; in fact the origin of the town’s name could come from the Arabic “Xabiga” meaning ” Algibe’s well ” as there is in fact an underground river called “Moraig “.

But what has totally transformed the landscape and economy is the explosion of tourism. In the 60s Jávea was an elite summer destination because of its privileged climate and beaches.

Today tourism is still the main source of income, promoting construction and other related sectors such as the real estate market.

The summer population increases to 150,000, mainly northern Europeans with a high purchasing power, although there is a trend now to more established tourism throughout the year.

The most widespread foreign resident population is English, followed far behind by the Germans, Dutch, Russians, Italians etc … and up to 85 nationalities have been identified as living in Jávea.